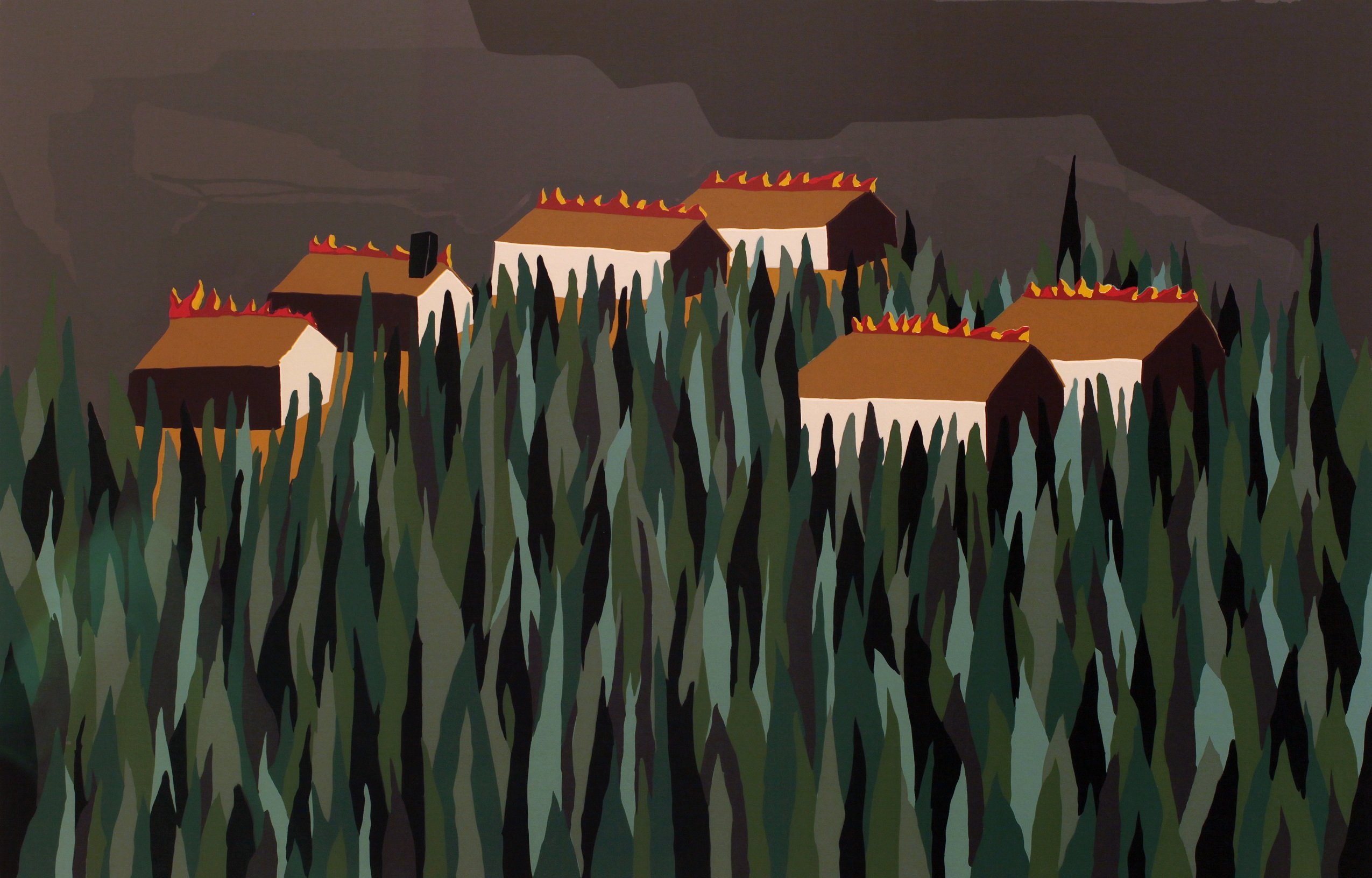 The four-number sequence that makes up the exhibition’s name refers variously to:
1. The number of a hotel room.
2. The street address of someone’s house.

3. A year in history, in which Europeans first arrived by sea into two different gulfs.

Here images, scents, texts, and objects allude to a home in which history has taken place, amidst roofs on fire, a greenhouse filled with tropical plants, an orphaned balcony, scattered threads, a soup made from stone, and chapters pulled from books not yet written.

1497 is configured as a set in which intimations of homeliness are also stagings and props that pretend to describe determinable trajectories. Instead, these intimations are incomplete, or led awry, evoking ellipses, truncations, and shifts in hand and position. They feign familiarity—for homes, lands, places to be remembered or longed for—whilst in turn betraying their own constructedness, distance, and impossible heaviness, feeling somehow adrift. Like that Borges story about the nation of cartographers who try to draw a comprehensive map of their empire, only to end up with a map so vast and detailed that it turns out to be the exact size of the empire itself, and thereby useless, and left to ruin. Here too is an implication of bodies—of residents, long-timers, locals, as well as tourists, guests, strangers, and colonizers—and how differently the same house is conjured by each, and also for whom a house is intended or not intended at any given time.

Elsewhere, Thani Al-Suwaidi describes another familiar kind of building in The Diesel:

“Eventually our dilapidated house began to turn into a city, and my father announced that our home was his cell. From chaos and wrath he forged a foundation stronger than a boulder’s. So it grew gradually; adding walls, windows, and doors.”

Elsewhere still, a friend remarked the other day that in her cosmopolitan city, the roads seem to reconfigure every day, and so each day she finds a different way home.

Hera Büyüktaşçıyan (b. 1984, Turkey) locates the figure of the other between the twinned spectres of absence and invisibility in order to weave connections between identity, memory, space and time. She works as a storyteller, integrating metaphors from her Greek-Armenian roots, Turkish myths, historic and iconographic elements to open up new narrative scopes. Water is a recurring theme in her practice, referring to what the artist understands as the fluid, aquatic nature of memory. Her most recent works enquire into the meaning of ‘absence’ within collective memory. There is a focus on urban transformation and the disappearance, invisibility and sense of isolation it causes.

Gitanjali Dang (b. India) is a Bombay-based curator, writer and researcher. She is interested in creating intimacy between all manners of context—including ideas, histories, philosophies, geographies and disciplines. Gitanjali hopes to make visible underlying hybridity and question notions of identity construction. She is curator of Khanabadosh, an itinerant arts lab she founded in Bombay in 2012.

Her recent projects with Khanabadosh include ‘Kairos’ (2013) Shedhalle, Zurich and ‘Love in the Time of Choleric Capitalism’ (2014), What About Art?, Bombay, which in 2016 will travel to The School of Arts and Aesthetics Gallery, Jawaharlal Nehru University, New Delhi.

Ongoing projects include; Draft, a year-long undertaking conceived in collaboration with Institute for Contemporary Art Research (IFCAR). Engaging critical discourse and practice related to the public sphere, the project is anchored in nine metropolises and opened with a conference in Bombay in June 2015.

She has had solo shows at Contemporary Art Center in Cincinnati, Museum voor Moderne Kunst in Arnhem, Arnolfini in Bristol, Castle Blandy in France, OK Center for Contemporary Art in Linz amongst other institutions. She has had gallery solos with Gallerie Yvon Lambert in Paris, Chemould Prescott Road in Mumbai, Galleria Continua in San Gimignano, and at the public gallery, Lalit Kala Akademie hosted Vadehra Gallery, New Delhi.

Raja’a Khalid (b. 1984, Saudi Arabia) is a Dubai-based artist and writer. In her current studio practice, Raja’a Khalid is interested in looking at the social hierarchies of space, East/West dialogues (both historical and contemporary), material and consumer culture, artistic interventions into archives and more recently, the appearance and rhetoric of social systems.

She received her MFA in Fine Art from Cornell University in 2013, where she was also the recipient of the Cornell Council for the Arts grant in 2012. Recent awards include NYU – Abu Dhabi’s FIND Artistic Research Fellowship. She has participated in group and solo project shows in New York and Dubai.

Jacob Lawrence (b. 1917, USA) was one of the most important artists of the 20th century, widely renowned for his modernist depictions of everyday life as well as epic narratives of African American history and historical figures.

Born in 1917 in Atlantic City, New Jersey, Lawrence moved with his family to Harlem in 1930, where he came into contact with some of the greatest artistic and intellectual minds of his generation. In the previous decade, Harlem had experienced the remarkably creative period known as the Harlem Renaissance, and the neighborhood was still the focal point of African-American culture. Before he was twenty years old, Lawrence had developed a powerful, concise style that expressed all of the vibrancy and pathos of the neighborhood and its occupants.

Lawrence became a nationally known figure virtually overnight when his The Migration Series was shown at New York’s Downtown Gallery in 1941. The twenty-four year old artist became the first African-American to be represented by a New York gallery. Fortune magazine published a lengthy article on the series that reproduced twenty-six of series’ sixty panels, and the entire series was purchased jointly by the Museum of Modern Art and the Phillips Collection.

Major traveling exhibitions of Lawrence’s work have been presented in museums across the country, including Jacob Lawrence: American Painter, organized by the Seattle Museum of Art; Jacob Lawrence: The Frederick Douglass and Harriet Tubman Series of 1938-40, organized by the Hampton University Museum in Virginia; and Jacob Lawrence’s The Migration Series, organized jointly by the Phillips Collection in Washington, DC and the Museum of Modern Art in New York. A major retrospective exhibition Over the Line: The Art and Life of Jacob Lawrence originated in 2001 at the Phillips Collection in Washington, DC and traveled to the Whitney Museum of American Art, the Detroit Institute of Arts, the High Museum of Art in Atlanta, GA, the Museum of Fine Arts in Houston, Texas, and the Seattle Art Museum.

Matheus Rocha Pitta (b. 1980, Brazil) works with photography, sculpture, video and installations. Through site interventions and sculptural actions his work conveys knowledge and narratives and through the use of images and objects it creates relevant references to contemporary and past events.

Rocha Pitta is particularly concerned with the two processes of apprehension and conversion. Apprehension has a double valence – ‘to take hold or confiscate’ and ‘to understand and perceive’. Consequently, images and objects – commodities taken from the outside world – become a means of expressing and understanding a specific reality. The process of conversion is based upon this exchange between matter and images, which becomes a phenomenological experience through his exhibitions. Rocha Pitta’s exhibitions are often constructed as circuits where the viewer is able to pick up references, develop thoughts and link the different elements that constitute the exhibition as a whole.

UBIK (b. 1985, India) lives and works in Dubai, UAE.
His work experiments with a variety of mediums. He does not position his work in a specific genre. The core of UBIK’s work deals with the relative ideology of chaos. It renders the absurdity of the world order and comments on the machinated playgrounds of human cliches, in a sarcastic and realistic way.UBIK crafts his work to be conceptual. Not in the form of technicality but rather its reactionary possibilities. The process of the work is to urge and provoke the viewer to self-reflect. The viewer is not an isolated agent, but rather his/er reaction is an integral part to the artistic production.

Currently, UBIK is heavily influenced by film, beatnik and gonzo literature, music, street art, anarchism and existentialist thought. His older works include drawings and paintings while his recent work has moved into a more conceptual direction, with a strong focus on text.
Deepak Unnikrishnan (b. UAE) is a writer from Abu Dhabi. His first set of short stories, Coffee Stains in a Camel’s Teacup (2004) was published by Vijitha Yapa Publications (Colombo, Sri Lanka). His fiction and non-fiction has appeared in Drunken Boat, Himal Southasian, Bound Off, The State Vol IV: Dubai, and in the anthology Breaking the Bow: Speculative Fiction Inspired by the Ramayana (Zubaan Books, India). He has an MFA from the School of the Art Institute of Chicago, where on scholarship he completed the manuscript for his first work of fiction set in the Gulf.

Danh Vo’s (b. 1975, Vietnam) conceptual artworks and installations often draw upon elements of personal lived experience (his own, the lives of his parents and other family members) to explore broader historical, social or political themes, particularly those relating to the history of Vietnam at the close of the twentiethcentury. Frequently comprised of documents, photographs, found objects (with emotional or historical significance), lettering or appropriations of works by other artists, Vo’s installations often address issues relating to identity and belonging, authorial status, ownership and the role of personal relationships. He is
particularly interested in the discrepancies between myth and reality, between the past and the present, and between the identities and histories imposed upon him by others and those that he creates for himself.

Vo studied at the Royal Academy of Fine Arts, Denmark and the Städelschule, Frankfurt. He was the winner of the Hugo Boss Prize (2012). He participated in the International Exhibition of the Venice Biennale in 2013 and will represent Denmark at the Biennale in 2015. He has held solo exhibitions at institutions such as Museo Jumex, Mexico City (2014-15); Nottingham Contemporary (2014); Musée d’art moderne de la Ville de Paris, Paris (2013); the Solomon R. Guggenheim Museum, New York (2013); the Art Institute of Chicago (2012); the Kunsthaus Bregenz, Austria (2012); Kunsthalle Basel, Switzerland (2009) and the Stedelijk Museum, Amsterdam (2008).

Lantian Xie (b. 1988, United Arab Emirates) makes images about belonging and gulfs. He is particularly interested in general trading, hotel lobbies, and cafeteria menus. Xie holds an MFA from the School of the Art Institute of Chicago. He also co-hosts a weekly programme on Dubai Eye 103.8FM Radio and is editor-at-large at Dubai-based publishing practice The State. Xie was formerly artist in residence at the Delfina Foundation in London.