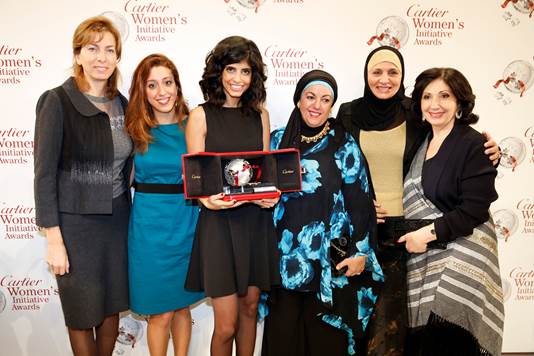 Cartier, the world-renowned jeweller and watchmaker, has been announced as a “Leading Partner” of Global Women’s Forum Dubai.Co-organised by Dubai Women Establishment and the Women’s Forum for the Economy & Society, Global Women’s Forum Dubaiis set to take place on 23-24 February 2016 at MadinatJumeirah in Dubai, under the patronage of His Highness Sheikh Mohammad bin Rashid Al-Maktoum, Vice President and Prime Minister of the UAE and Ruler of Dubai; and led by Her Highness SheikhaManal bint Mohammed bin Rashid Al Maktoum, President of the UAE Gender Balance Council, President of Dubai Women Establishment and wife of HH Sheikh Mansour bin Zayed Al Nahyan, Deputy Prime Minister and Minister of Presidential Affairs, UAE.

Cartier has a long association with supporting women since the Cartier Women’s Initiative Awards was launched ten years ago in 2006.Established by Cartier, the Women’s Forum for the Economy & Society, the INSEAD business school and McKinsey & Company, the Cartier Women’s Initiative Awards is an annual business plan competition which awards six laureates with US$20,000 in funding, personalised coaching for one year, networking and visibility opportunities.The awards are open to female entrepreneurs leading a creative, for-profit start-up with financial sustainability and social impact. The programme waslaunched to contribute to the global economy, by seeking out audacious female entrepreneurs from around the world. Since the establishment of the initiative, Cartier has strived to support and recognise creative women who are making concrete contributions to finding solutions for future generations, as well as to encourage more women to achieve their full potential and assist them throughout their journey.

As part of its partnership with Global Women’s Forum Dubai, Cartier will be hosting two sessions at the event, where previous Cartier Women’s Initiative Awards finalists and laureates will discuss cross-cultural management focusing on the differences of geography, language and culture and the challenges that they usually face when seeking a team’s support for their business. The finalists and laureates will also discuss their life-work family balance in terms of challenges and opportunities.The ten-year anniversary of the Cartier Women’s Initiative Awards will be at the heart of two additional events: a session to highlight the Awards’ achievements through an assessment study conducted by INSEAD business school and a private gala dinner hosted by Cartier, on Feb. 23rd, in the presence of Cyrille Vigneron, President and CEO, Cartier International.

Expected to attract more than 2,000 participants and 200 speakers and international delegates, Global Women’s Forum Dubai will bring together leaders from around the world – women and men – with the aim of considering new perspectives for today and tomorrow; creating a powerful, global network capable of boosting the influence of women throughout the world; conceiving innovative and concrete action plans to encourage women’s contribution to society; and promoting diversity in the business world – values that Cartier has never ceased to champion. Cartier proudly joins Dubai Women Establishment and the Women’s Forum for the Economy & Society in bringing this exceptional event to life.

CyrilleVigneron, President and CEO of Cartier International, said:“Entrepreneurial spirit is a precious asset to be cultivated, particularly during challenging times. Cartier remains deeply committed to supporting entrepreneurial initiatives from around the world through the annual Cartier Women’s Initiative Awards.Global Women’s Forum Dubai will certainly contribute to women’s empowerment efforts worldwide and thus mirrors Cartier’s ideals and values: initiative, audacity and willpower to make the world we live in a better place.”

Jacqueline Franjou, CEO of the Women’s Forum for the Economy & Society: “Building networks, bringing people together to share their knowledge and generosity – that’s the whole point of the Women’s Forum for the Economy & Society, and that’s the spirit with which the Cartier Women’s Initiative Awards began. It all started in 2006 with a partnership between the Women’s Forum and Cartier, and I’m proud to say that, 10 years later, this partnership is still going strong. Withbarely a dozen finalists in 2006, theCartier Women’s Initiative Awards has grown into a worldwide network of enterprising women, and I’m thrilled to be able to celebrate this important 10th anniversary with all of our friends in Dubai.”

Shamsa Saleh, CEO of Dubai Women Establishment (DWE) said: “Over the past ten years, the Cartier Women’s Initiative Awards has fostered a unique community of ambitious women entrepreneurs who are striving for change and providing a significant contribution to the global economy. More than 160 promising female business-owners have participated in the awardsand nearly 60 laureates have been recognised, some of whom will share their inspirational stories for us at Global Women’s Forum Dubai.”

She continued: “Through a number of initiatives and events, Dubai Women Establishment is committed to creating an environment where women have the opportunities available to grow, develop and succeed in the business world. Providing a key platform for strengthening the influence of innovative, enterprising women from around the world, Global Women’s Forum Dubai supports these aims, andI’d like to express our sincere appreciation to Cartier for partnering with us. We look forward to helping Cartier celebrate ten years of incredible work at Global Women’s Forum Dubai.”

The event will feature the renowned Women’s Forum Discovery exhibition, offering a range of creative hubs hosting interactive workshops and exhibits to build on the various topics explored during the main plenary sessions. A number of other key Women’s Forum initiatives will also be part of Global Women’s Forum Dubai, including CEO Champions, Rising Talents and Women in Media.

Global Women’s Forum Dubai will highlight the UAE and region’s achievements in improving gender balance, and provide a global platform for thought leaders and decision-makers to build networks, exchange ideas and share experiences, to enhance female engagement and participation. The event is expected to attract over 2,000 international and regional decision-makers, representing the business, government, academic, social and cultural sectors throughout the world.

Held under the patronage of His Highness Sheikh Mohammad bin Rashid Al-Maktoum, UAE Vice President and Prime Minister of the United Arab Emirates and Ruler of Dubai, and led by Her Highness SheikhaManal bint Mohammed bin Rashid Al Maktoum, President of UAE Gender Balance Council and President of Dubai Women Establishment; Global Women’s Forum Dubai will showcase the capabilities of women from the Arab world on the global stage and their contribution to the region’s socio-economic growth, and help to change perceptions about Arab women. Global Women’s Forum Dubai will also support the UAE’s strategy to empower societies through women’s participation, in addition to Dubai’s vision to be recognised as a leading global events destination.

Building on the theme,“Let’s Innovate!”, Global Women’s Forum Dubai will explore what innovation really means in today’s technology-focussed era. The event will address women’s sustainable role in this revolutionary world, with the aim of strengthening the influence of women globally, maximising their contribution to socio-economic development, and inspiring future generations of women to actively participate in nation-building. The Global Women’s Forum Dubai will serve as a key platform, not only for advancing innovation, but also for highlighting the achievements and participation of Arab women in innovation. The programme will feature plenaries, interactive sessions and practical workshops under five pillars – Achieving, Creating, Giving, Energising, and Sustaining. DEWA and Cartier are amongst the partners of the Global Women’s Forum Dubai.

The Dubai Women Establishment (DWE) was formed in 2006 under law no. (24) by His Highness Sheikh Mohammed Bin Rashid Al Maktoum – UAE Vice President and Prime Minister, and Ruler of Dubai. DWE is headed by Her Highness SheikhaManal Bint Mohammed Bin Rashid Al Maktoum – President of the UAE Gender Balance Council and wife of HH Sheikh Mansour bin Zayed Al Nahyan, Deputy Prime Minister and Minister of Presidential Affairs. As a statutory body of Dubai Government and as per its founding decree, the Establishment aims to encourage and facilitate the participation of Emirati women in the workforce and society.

Its mandate includes extensive research into identifying and quantifying the status of women in the workforce of Dubai, as well as initiatives towards women’s further development opportunities. Awareness and policies that are conducive to women in the workforce are recommended to the Dubai Government as solutions to enable women to play a greater role within the UAE and on a global scale. The term participation includes acknowledgment of women in arts, women in sports and women in leadership, professionally in their field as well as the societal arena, such as acts of philanthropy, humanitarianism and politics.

About the Women’s Forum for the Economy and Society

Since 2005 the Women’s Forum for the Economy & Society has been the world’s leading platform featuring women’s views and voices on major social and economic issues. Deploying the experience of both women and men – business leaders, researchers, politicians, entrepreneurs… – across all generations and geographies, our conferences feature broad, rich and edgy debates, acting as a sounding board for today’s important ideas and a springboard for tomorrow’s solutions. The practical discussions in our Discovery sessions typically focus not only on overcoming barriers but on creating new opportunities. The Women’s Forum also promotes the advancement of women though regional and international networks. In addition to the annual Women’s Forum Global Meeting in Deauville, France, important Women’s Forum meetings have taken place in Brazil, Myanmar, Italy and Brussels. The first Women’s Forum Mexico is scheduled for 27-28 April 2016 in Mexico City, with upcoming events planned for Tunisia and Mauritius. And the 12th edition of the Women’s Forum Global Meeting will take place 30 November-2 December 2016 in Deauville.