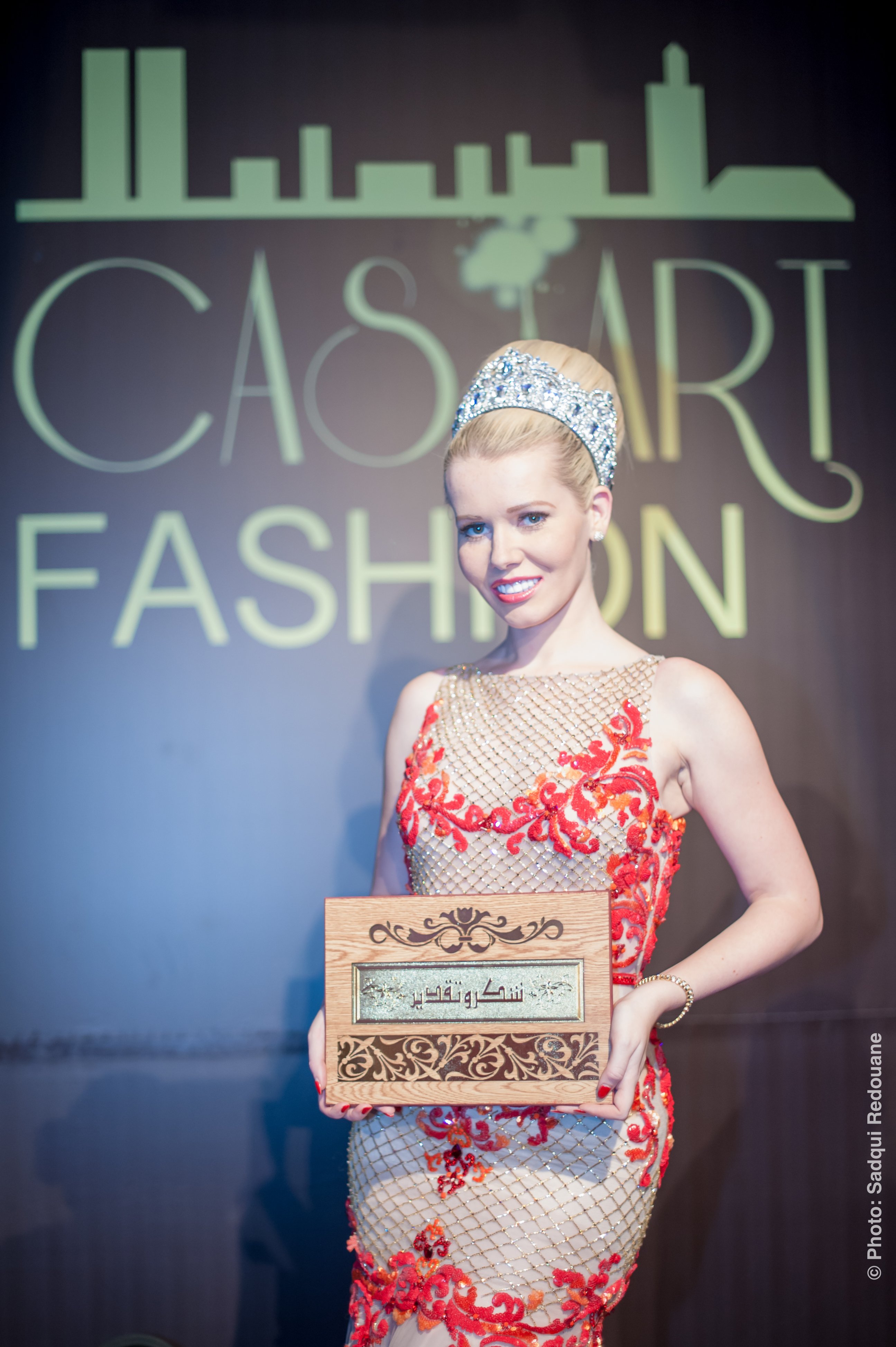 Tourism and brand ambassador Lenka Josefiova received a special award for promoting the tourism of Morocco during the Casa Art festival held in Hyatt Regency hotel in Casablanca, Morocco that started last July 14, 2016.

The reigning Miss European Tourism has been promoting different destinations as part of her goodwill to empower the tourism industry. Lenka was invited to the prestigious event that aims to promote tourism, fashion, art and music along with Her Highness Sheikha Noora Al-Khalifa from Bahrain, an entrepreneur, motivational speaker & philanthropist and Egyptian actress and singer Leeka Sweidan amongst guest of honour. Lenka shines with evening gowns designed by Emirati fashion designer Mona Al Mansouri.

“Morocco is one of my favourite destinations and I am deeply in love with their food and culture. Moroccan people are also one of the warmest and hospitable souls in the world and it is my pleasure to help promote this beautiful country” the TV host and model added that she is also busy with her new blog ‘The Travelling Beauty Queen’. Lenka was also awarded as Most Inspirational Beauty Queen last January 2016.

Lenka Josefiova is a Dubai-based Czech-born supermodel, host, TV presenter, actress, brand ambassador and a Beauty pageant title holder. She was crowned Miss Intercontinental Czech Republic 2014, Most Popular Star of the year 2014 during The Asian Trend Awards 2014 held in China, representing the UAE & she is the newly crowned Miss European Tourism 2015, winning a crown over 40 contestants in recently concluded in Malta.
Career Highlights

Prior and after Miss European Tourism 2015, Josefiova guested on multiple international TV shows as a guest. Eventually, she was offered hosting stints including a spot in the Middle East Fashion Week 2014 & Dubai International Film Festival 2015 as a red carpet correspondent. Eventually, Lenka Josefiova signed up exclusive contracts with numerous international brands including Vero Milano Fashion, Deja vu, Bella Donna, Leo Almodal Haute Couture & much more as an Official brand ambassador. She was booked on several fashion magazines covers, editorials and fashion runways all over the Middle East region. In August 2015, she was chosen as the official TV host of Fashion Festival Bali and in October 2015, she was unveiled as the official Middle East ambassador of Leo Almodal Haute Couture.
After winning Miss European Tourism 2015 title in Malta in October 2015, Lenka did a lot of international projects to promote tourism. She filmed documentary movies in Tunisia, Sfax & Island Djerba to promote tourism in Tunisia, had the honour to meet the Mayor of the city Sfax at the Official ceremony held in the Town Hall of Sfax in honor of Dubai-based beauty queen arrival. After her several trips to Tunisia, where she was invited by Ministry of Tourism of Tunisia, she was also invited as a special guest for Nefertiti International Fashion Festival 2016 held in Luxor in Egypt. Lenka was invited by the ministry of Tourism of Egypt & fashion designer Mona Al Mansouri. Lenka’s passion for travelling & tourism continues as she launched her own Travel blog called: The Travelling Beauty Queen – All around the world with Lenka. She started her blog in April featuring her trip to Luxor – Egypt.

More Information
You can read her Travel blog on this link.